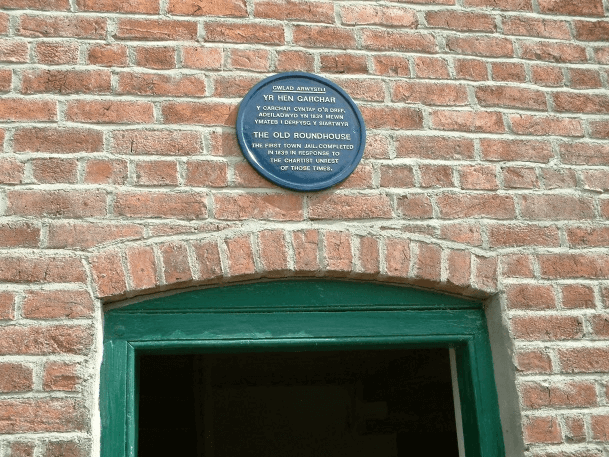 Starting with a place little more than a glorified shed, filled with junk, roofed with corrugated iron and with no water, electricity, sewage or gas, Richard and Alison have laboured (sometimes literally!) to turn the Old Jail into a much-loved and comfortable dwelling. Below you will find snapshots of the transformation process before, during and after! Some of the original features and materials have been retained, others have been carefully replaced.

Ground floor, prior to renovation work (A place for stored junk!):

Front and back bedrooms prior to renovation work starting:

Digging revealed the pillars previously supporting the huge filter tank and the cast-iron pipe bringing in water from the reservoir. The filter tank occupied the space of the two former cells.

The back and front windows and most of the beams upstairs and in the living room are original from 1839. During renovation, the wooden beams of the room were shot-blasted, lightly sanded and then painted with sloppy beeswax to give a fine smell and an appropriate surface texture. The ceiling added in 1894 has been taken away in the bedroom to expose the beams, but the partition dating from the same period remains. The door at the foot of the stairs in 1894 is now used partly for a cupboard door in the front bedroom and also for the electricity meter cupboard by the front door. The side of the stairs is original to 1839 and the planks and door added in 1894 have been removed. Bedroom doors had gone but Richard had the present doors made in the style of the 1830s with the hinges and latches also of that period. (Original door and hinges are under the stairs.)

We also found the original slate floor of each cell, now approximately 23” under the present oak floor. A trapdoor provides access to these. In the dining area the curve above the cell window is the line of the brick-vaulted ceiling to the cell demolished when the filter tank was built. Floor to ceiling, each cell was approximately 9’2” tall, with the only light and ventilation coming through the open barred window. Doors from the living room led down steps onto the floor of each cell – the sandstone step remains were found in the cell which is now the dining area.

The grates in the living room and front bedroom had been removed years ago, probably in 1902. The present upstairs grate Richard found in a Tamworth scrap yard but the living room grate came from No. 4 Highgate Street, the house next door, when it was being modernised 25 years ago. Richard had kept it in the black lean-to shed next to the jail, repaired one or two parts and installed it in the fireplace space which was identical to that next door (and in the other three houses). The wooden settle, also from No. 4 Highgate Street, came between the fireplace and the outside door, blocking any draughts but it now sits adjacent to the fireplace.

The slate of the living room came originally from the demolished tannery across the road, where Dick’s brother Cyrus had been the Works Manager. In the 1870s it had been a flannel mill (Spring Mill) owned by Richard George, Richard’s great grandfather’s eldest brother. Richard had kept the slate as a path at the rear of the Jail after the tannery was demolished in the 1970s. The floor now has buried water pipes for under-floor heating and in the central space the cobbles (or pitching) echo those dug up in 1954. They were of a cruder nature in size, with no pattern. The present finer cobbles are similar to others found in farms in the Llanidloes area. Back to top